If pallet companies, nail salons, construction companies seem to be getting more inspections than the average business, you are not being paranoid. The Occupational Safety and Health Administration (OSHA) really is targeting the industry. In this column, I’ll address some of the common questions about what triggers inspections, and how OSHA policy has changed recently in determining who gets targeted for these unannounced visits.

There are several criteria that can spark OSHA inspections. The first, and most serious, is the “FATCAT” – an inspection triggered by a report of a fatality or a catastrophic accident. (Defined as one resulting in the hospitalization of three or more persons – but as a practical matter, anything that gets reported to OSHA by the media or a hospital, or an event with high visibility [e.g., a fire or explosion] can fall into this category.) In FATCAT cases, the local OSHA office pushes this employer to the top of its list and dispatches an investigative team immediately. However, about a third of industry inspections are set off by employee complaints. These can result from calls to OSHA by current or former workers complaining about workplace conditions or health hazards. As you might expect, often these are set in motion by disgruntled employees who were recently fired or disciplined; union negotiations that are not going well can also give rise to OSHA complaint reports. Although OSHA had informally established a system of calling the employer to ask “what’s up." (except where the complaint indicated that workers were in imminent danger of harm), a 2005 U.S. Supreme Court decision, in Olson v. United States, indicated that the U.S. Department of Labor could be sued in tort if it failed to adequately respond to complaints and inspect a workplace, and a subsequent accident linked to the complainedabout conditions occurred. Therefore, OSHA is taking worker complaints quite seriously!

Q: How has OSHA’s SST policy changed? A: On June 12, 2006, OSHA released a new Directive (06-01, CPL 02) on SST, which replaces the version adopted during the previous OSHA administration. It implements the agency’s SST 2005 plan. According to the new Directive, the major changes are that OSHA has: • Decreased the number of low-rate establishments from high-rate industries that are added to the primary inspection list; • Added to the primary inspection list some establishments that did not respond to the 2005 OSHA Data Initiative survey; and, • Revised a provision concerning the Enhanced Enforcement Program (EEP) to allow for the deletion of certain establishments if they have had a comprehensive safety inspection within the previous 12 months.

Q: How does OSHA get the injury and illness data that it uses to place companies on the SST list? A: OSHA has a “Data Initiative,” which is a nationwide collection of establishment-specific injury and illness data from approximately 80,000 establishments. It collects data from establishments by using the “OSHA WorkRelated Injury and Illness Data Collection Form.” The 2004 injury and illness data that was collected by the 2005 Data Initiative is used in the 2006 Site-Specific Targeting program. The selection criteria for primary inspection targets considers the employer’s Days Away from Work Injury and Illness Case Rate (DAFWII) and the Days Away from Work, Transferred or Restricted Duty (DART) rates. The DAFWII case rate is the number of cases that involve days away from work per 100 full-time equivalent employees. Cases that involve only temporary transfers to another job or restricted work are not included in the DAFWII rate. There are secondary and tertiary lists but these only get inspected if all primary target inspections are completed and there are still OSHA resources left over for that budget cycle. The national DART rate for private industry for 2004 was 2.5, and the DAFWII case rate was 1.4. The SST- 06 plan initially selects for inspection of all worksites with a DART rate at or above 12.0, or a DAFWII case rate at or above 9.0 for the primary list. This is approximately 4,250 sites. In order to review the actual degree of compliance with OSHA requirements by establishments that report low DART rates, 175 low-rate establishments in high-rate industries, with 75 employees or more, are added to the primary list. These establishments will have a DART rate from 0.0 to 2.5, and they are selected from industries that have a DART rate from 6.7 to 10.6, as reported by the Bureau of Labor Statistics (BLS) Annual Survey. So if you are in a highrate industry (which includes the pallet industry), simply having a “good” incidence rate will not necessarily insulate you from a programmed OSHA inspection during the coming year.

Q: My business is in a state that administers its own OSHA program. Does the new policy apply there? A: So-called “state plan states” (there are current 23 that handle inspections directly, instead of using federal personnel, for private-sector employer enforcement) have several options The primary way that employers get on OSHA’s “hit list” despite having no high visibility incidents and having good employee relations is through the agency’s Site-Specific Targeting program – also known as a “programmed inspection.” under the new policy: • They can use an existing statedeveloped high hazard inspection targeting system based on available state data. • They can use an existing high hazard inspection targeting system based on OSHA Instruction CPL 02-00-025, which relies upon BLS injury/illness rate data. • They can use the targeting inspection plan set out in the revised June 2006 federal OSHA policy, which is based on establishmentspecific employer DART and DAFWII data obtained through the 2005 Data Initiative. Regardless of which option is selected, the state’s inspection targeting system, including supporting documents such as directives or other guidance must be documented in the state plan, which is subject to OSHA approval and can be rejected.

Q: Is the SST different from the “Enhanced Enforcement Program” (EEP) that I heard about? A: Yes, but there are some overlapping features. The EEP is designed, in part, to break through corporate “alter ego” barriers and permit greater use of the higher penalty “repeat” violations by identifying commonality of ownership and operation. In addition, it is intended to enhance corporate accountability and awareness of violations that might be occurring at local or regional operations. It focuses on employers who, despite past enforcement and OSHA outreach, ignore their compliance obligations and place workers at risk. In a recent document, OSHA discussed the progress of its EEP: “EEP targets cases with extremely serious violations related to a fatality or multiple willful or repeated violations. During FY2005, OSHA identified 615 inspections that qualified as EEP cases – a 200 percent increase over the preceding year. . . If an inspection is classified as an EEP, then it may receive, among other things, follow-up inspections, inspections of other workplaces of that employer, and more stringent settlement provisions.” If an establishment originally on the SST primary list is identified as an initial-EEP case, or is an establishment related to an EEP case, it will be placed in the current inspection cycle and the OSHA Area Director will be notified.

Q: Are there any ways to get off the SST list? A: An establishment participating in an OSHA Strategic Partnership (OSP), for which there is a signed agreement, may be carried over to a future cycle to allow the SST inspection to be deferred for up to six months from the signing of the partnership agreement or an establishment’s subsequent entry into the partnership. In addition, an employer who has requested an initial full-service comprehensive consultation visit for safety or health from the OSHA Consultation Program, and which has a visit scheduled by the State Consultation Program, may be deferred from the SST inspection for 90 days from the date of notification by the State Consultation Program to the Regional Office. There are also deferrals for companies that are participants in OSHA’s Voluntary Protection Program (VPP) or in the OSHA Consultation Safety and Health Achievement Recognition Program (SHARP) or pre-SHARP programs. Finally, it is also important to recognize that SST programmed inspections are triggered by what you did two years in the past and do not necessarily reflect how you are currently performing. Obviously, if you have significantly revised your safety and health program during the past two years (e.g., you signed up to participate in the NWPCA Plant Safety and Health Manual and Training programs), you will want to point this out to OSHA at the outset of the inspection. This may generate good will that could reduce the severity of the inspection because you are demonstrating due diligence in attempting to comply with standards and taking a proactive approach to safety and health management! 

This article was contributed by Adele L. Abrams, an attorney and safety professional who represents companies in litigation with OSHA nationwide.  If you need help with your Safety & Compliance Issues or OSHA Enforcement or OSHA Consultation has contacted you, feel free to contact us for our help at no cost to you.

Glenn Salter is an OSHA Certified Trainer. licensed for General Industry and the Construction Industry.

Another category is the “drive by” inspection: an OSHA inspector sees unsafe conditions or actions occurring while passing by. Normally, he/she will try to get some photographs or videotape of the situation from “outside the gate,” and then return to do a wall-towall inspection. There can also be professional referrals to OSHA from other state or federal agencies (e.g., the Environmental Protection Agency) if one of those government workers observes a condition that is believed to constitute an OSHA violation. There are also inspections that impact industries covered in various OSHA “Special Emphasis” programs (SEPs), such as the ones that were conducted in recent years covering workplace amputations and lead exposure. Inspections conducted under an SEP are scheduled and conducted to focus on establishments where exposure to the targeted hazard or toxic substances are likely to occur, or where there are known illness cases establishing a trend 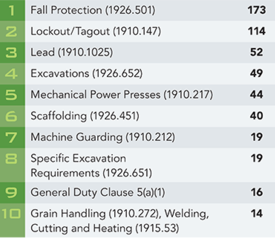 Use our OSHA Certified Trainer 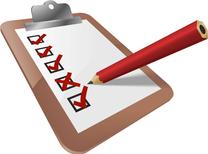 OSHA Site-Specific Targeting: How to Get On (and Off) the OSHA “Hit List”

But the primary way that employers get on OSHA’s “hit list” despite having no high visibility incidents and having good employee relations is through the agency’s Site-Specific Targeting (SST) program – also known as a “programmed inspection.”

Question: What types of inspections occur under the SST program? A: The SST programmed inspections are comprehensive safety inspections – or “wall to wall” inspections. Normally, however, they do not include health inspection components unless it is deemed necessary based upon a compliance officer’s referral (e.g., the OSHA inspector came on site and saw potential health hazards such as noise, wood dust, ergonomic hazards, or exposure to toxic chemicals), or because a health inspection